In preparation for it, I did some careful counting of titles in two research bibliographies. The details are available below.

We know that most early modern Anabaptist books were written in Dutch, thanks to two bibliographies. In 1962 Hans Hillerbrand, with the help of Nelson P. Springer and many others, published A Bibliography of Anabaptism, 1520-1630; and in 1977 N.P. Springer and A.J. Klassen, again with the help of a bigger research team, published the Mennonite Bibliography, 1631-1961. Each of these bibliographies provides scholars with data from continental Europe and beyond; the Mennonite Bibliography was an ambitious attempt to gather primary and secondary literature from around the world. The collections are not without their gaps and blind spots, but from them we can get a reasonable sense of Anabaptist book production since the early Reformation.

To evaluate the contents of the two bibliographies I have counted books from relevant parts of each collection, taking care to note in which language each book was written. When selecting which portions of each bibliography to count, I had to make several choices. For my analysis of A Bibliography of Anabaptism, 1520-1630 I chose to only count the number of books written by Anabaptists, not their opponents which are recorded in a separate subsection. The books are not organized by region, only by subject. I also only counted sources published between 1521 and 1630 (not later editions) that are recorded in three subsections of the Bibliography (“Writings by Anabaptists”, “Hymnology”, and “Martyrology”), and I tried to avoid counting duplicate editions from the same year (I have also applied this principle to the counting of data from the 1977 bibliography).

I have included a graph and table of the results, organized by decade and language (Fig. 1.a. and 1.b.). 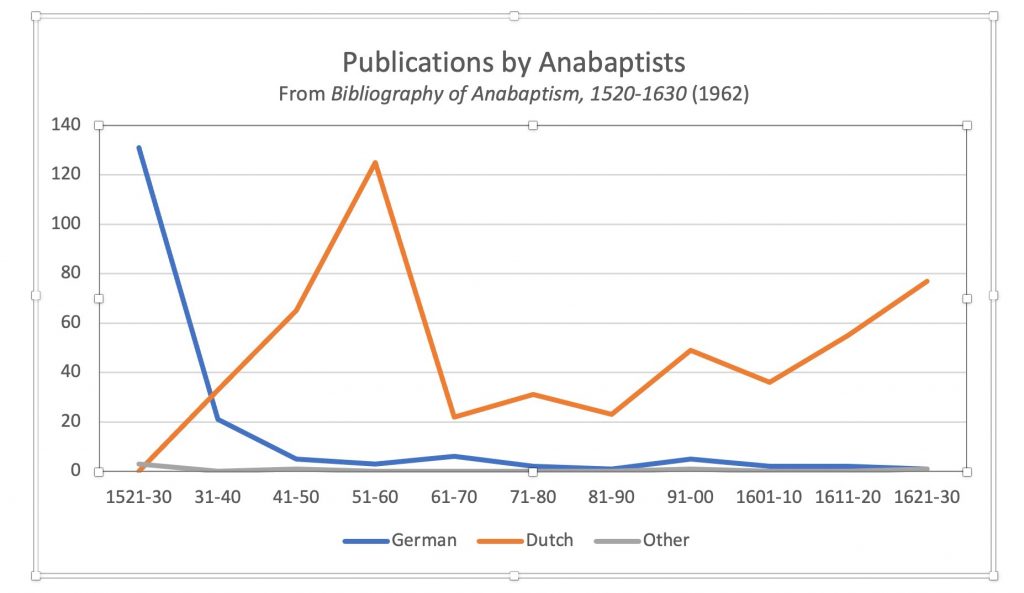 The steady rise in Dutch-language book production, as well as the flatlining of German-language printing, continued beyond 1630. This is evident from the data in the Mennonite Bibliography, 1631-1961, Bd. 1. This 1977 bibliography is organized differently than the earlier one from 1962. The first of the collection’s two volumes is devoted to published literature from and about all parts of the world, apart from North America (the subject of Bd. 2). Of the first volume’s approximately 530 pages, the great majority (S. 80-487) list European literature under eight mostly national headings. The Netherlands is the focus of the longest section (S. 91-363), followed by Germany and Switzerland, each with much shorter sections. These basic notes emphasize a point that Sprunger makes in the quotation from 2006 included earlier in my essay for the Geschichtsblätter: in the early modern era (and beyond) “the Netherlands exceeded all other countries in the quantity and quality of Mennonite-related printing”.

While I have focused in this essay primarily on book printed in the Dutch Republic, I have counted books in several sections.The Mennonite Bibliigraphy, vol. 1, includes the following sections:

For my analysis below I am only focusing on the biggest collections: those titles from Europe generally, from the Netherlands, from Germany, and from Switzerland. Each of these sections is divided into further subsections:

I have counted and organized by language (but not by region) those works from these sections from 1631-1700.

I have included another graph and table of the results, also organized by decade and language (Fig. 2.a. and 2.b.). 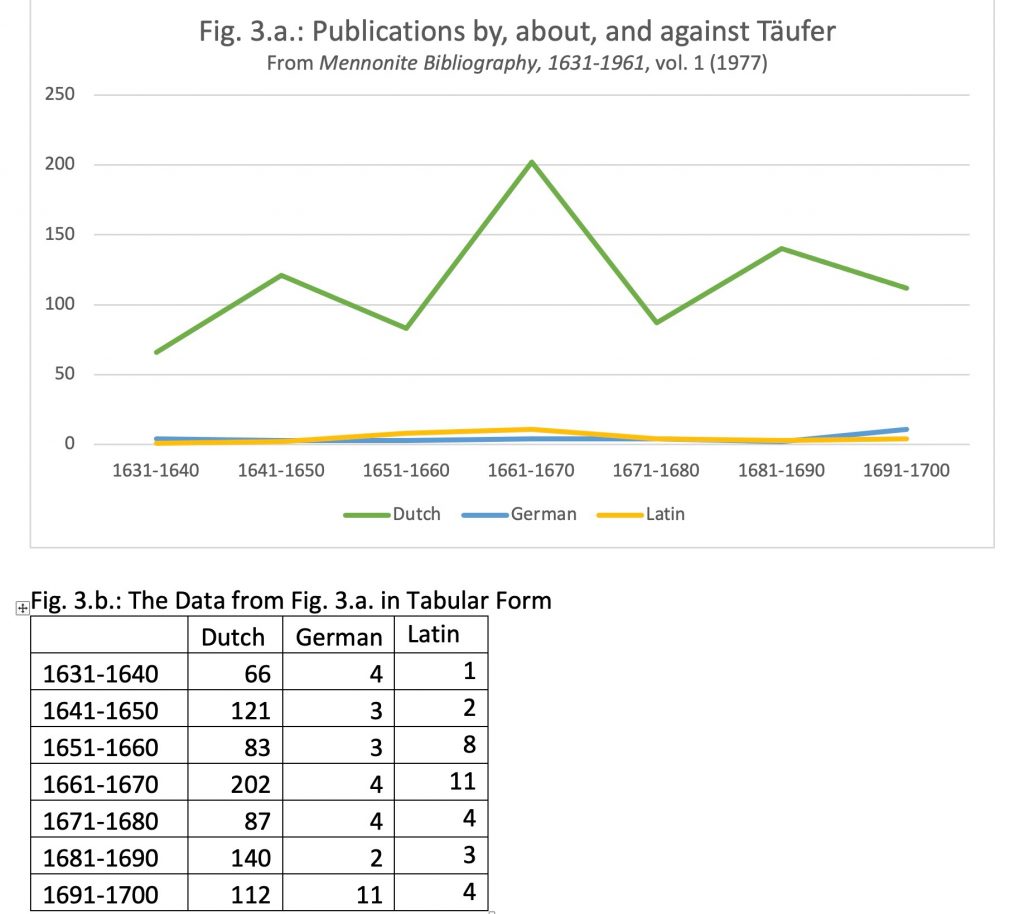 Again, several observations are in order. First, while the starting date of 1631 is determined by the selection criteria of the bibliography compilers, the end date of 1700 is completely arbitrary. I have chosen it only out of convenience. Second, it has to be noted that a major difference between the 1962 and 1977 bibliographies is that in the latter collection there is no distinction made between polemical works for or against Anabaptists. There is a good reason for this: namely, that by the 17th century, polemics against Anabaptists originated about equally from Anabaptist opponents of other Anabaptists as from Catholics, Lutherans or the Reformed. Therefore, the second set of data include printed texts by, about and against Anabaptists. Third, on a related note, the spike in publications in the 1660s is due largely to the War of the Lambs and other disputes connected with the Lamist-Zonist schism (see the third vignette from the opening of this essay). Finally, I have included a column for Latin works, since Anabaptists wrote a noteworthy number of scholarly works in that language.

Readers should know that I do not in any way claim that these data are definitive. First, they do not include the many manuscripts written by Anabaptist scribes and preserved in archives across Europe and elsewhere. While manuscripts are very valuable sources about the past, they take incredible amounts of energy to gather. Counting them for this essay would be too painstaking and time-consuming. I also think there are good reasons for focusing on printed books, namely, these were more reproducible than manuscripts, and therefore they could reach larger audiences and have greater impact. Second, it is worth noting that some of the works published in German (e.g., entry 2988, a selection from Geistliches Blumengärtlein [1680]) and were published in the Dutch Republic, while some Dutch-language books were published outside the Dutch Republic. However, most of the works in Dutch published after the creation of the Dutch Republic were published within its borders. Third, I have left out the few works published in other languages that are included in the Hillerbrand bibliography. These other languages of publication include English, and French, but these publication are so few in number that they seem to be insignificant. It is worth considering the selection criteria of the compiler here, since another work published in 1962, George H. Williams’s The Radical Reformation, included Italians among the Anabaptists of the 16th century, and from the early 17th century onward there was a growing collection of English-language books defending adult baptism. On a further topic related to the biases of the compiler, it should be noted that careful reviewers who know early modern Anabaptist history well will undoubtedly notice publications by Anabaptist authors that the compiler did not include. An example that stands out for me is that Hillerbrand includes only one publication by Joost van den Vondel (1587-1679). Even though Vondel was certainly one of the most prolific and important Mennonite writers of the 1620s, most of the works he produced are in the genres of poetry and dramatic literature. In other words, few of his publications fall into a conventional category of “Anabaptist” literature, even though they were indeed written by a man who was an Anabaptist at the time. Finally, regardless of the compiler’s historiographical choices and prejudices, anyone who reviews my work will probably come up with slightly different numbers than I have, either because I am sure to have made some mistakes or because other reviewers may well make evaluative choices that are not the same as mine.

Even with these cautions in mind, the data are clear and striking: Most Anabaptist books published between the middle of the 16th century and the end of the 17th century were written in Dutch, and most of these were published in the Dutch Republic (1581-1795). The Dutch Republic was the cultural centre of gravity for early modern Anabaptism.